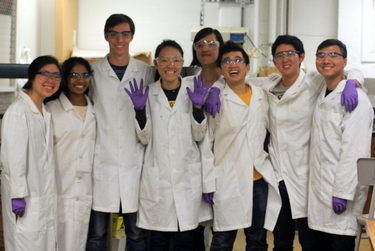 Our team is focused on providing power for the car through use of an aluminum air battery. Never having been used before by the Berkeley Chem-E car team, this project is focused on developing a battery that provides enough power to run the car, and to get the power output as consistent as possible. We test additives, structural changes and side reactions to try and optimize our power output to try and get the power source competition ready. 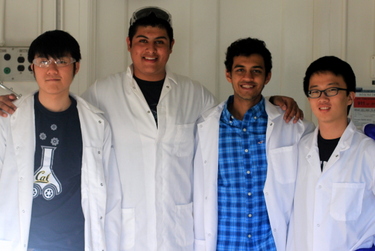 In the past years of research, design, manufacturing, and testing of our vehicles, our student organization has almost always relied on some form of magnesium oxide and zinc battery to provide the power necessary to operate and move our car. While we have made a lot of progress within the design and fabrication of these batteries, the waste generated by such a power source and the inconsistency of the performance under stress by these self assembled batteries has troubled us at various regional and national competitions in the past and overall in our lab testing and design.

To combat this, we have decided to conduct testing upon a new form of power generation in order to create the voltage necessary to operate our car and have come across the conclusion that hydrogen fuel cells stand out as one of the most viable, efficient, reliable, and green power sources available to utilize for our purposes. Utilizing solely hydrogen to generate to current and voltage potential necessary to operate our vehicle, we believe that this may the next step in making our cars much more safe and environmentally conscious. 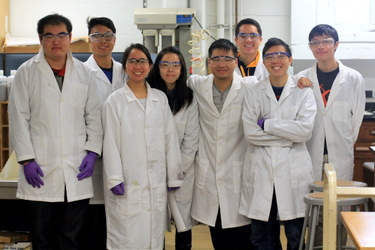 We want to make a low-cost, environmentally benign, zinc-air battery as a power source for the car. The anode is zinc metal, the cathode is carbon graphite, and the electrolyte is a dilute aqueous solution of NaOH. Though this is a popular battery in ChemE Car competitions, it has never been executed by the UC Berkeley ChemE Car team, so we benefit from a fresh perspective on the power source. The project will start from the very basics of research before traversing into experimental trial and error, quality control, and finally production. Ultimately, our final goal is to bring the science in journal articles to reality. 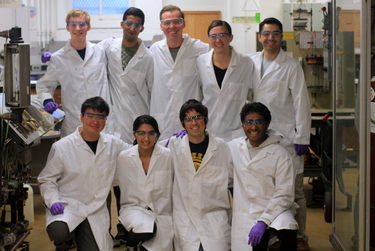 On the alkaline battery team we generate power with a zinc-manganese dioxide reaction. This year, we are focusing on decreasing the internal resistance of our battery by researching and troubleshooting the zinc anode composition. Our plans are to formulate a composition than will reduce corrosion, improve electrical conductivity and keep the battery from drying out because the high internal resistance is likely due to one or more of these factors. 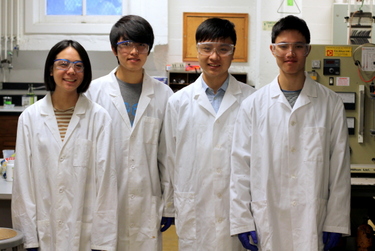 The Experimental Clock team is a new addition to ChemE Car. Our focus is to try out new methods of controlling the car. Currently, there are three designs that are under testing. The electrochemical clock uses the redox properties of conductive polymers to create a delay channel. When a driving voltage is applied to this apparatus, a reduction front modeled with Fick’s law (with electromigration) moves through the delay channel towards the switch, which loses conductivity once reduced. By changing the parameters revolving the delay channel, we can determine the speed of the reduction front. Our goal for the electrochemical clock is to find a viable parameter to manipulate the delay time. The other two clock designs are enzymatic - a peroxidase clock and a catalase clock. The peroxidase clock utilizes TMB, which changes color through a redox reaction catalyzed by peroxidase, to operate a photosensor-based control box. Meanwhile, the catalase clock uses a schematic similar to that of the peroxide clock, but with catalase as the catalyst. Our goal for the catalase clock is to improve our catalase extraction and purification process. 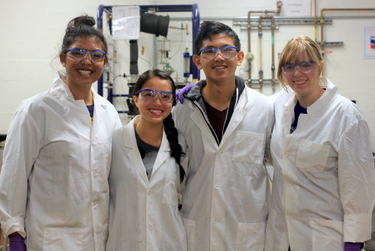 Our goal for the semester is to develop and build a control device that relies on the decomposition of hydrogen peroxide catalyzed by potassium iodide, which produces water and oxygen gas. The reaction flask is attached to a manometer, filled with colored water, which has a photosensor at near the top. As the pressure builds up from the production of oxygen, the level of the fluid will rise until it cuts off the photosensor, which will turn off the motor. Aside from myself, the team consists of Emmy Tian, Jilian Cabornay, and Laura Strong. My email is patrickzhang@berkeley.edu, but feel free to talk to any of us regarding the project or whatever you like. 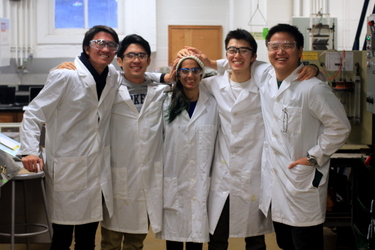 This project uses the Iodine Clock Reaction. More specifically, it is the vitamin C clock reaction. The purpose of the Iodine team is to control how long our competition car operates for. This is done using a photo sensor through our iodine solution. The iodine clock reaction starts off as a clear solution and later turns dark blue; depending on how much reactants are added into the solution, we control the time when the color change occurs, which subsequently cuts off the light to the photo sensor and cuts the circuit that connects the motor to the car’s power source. 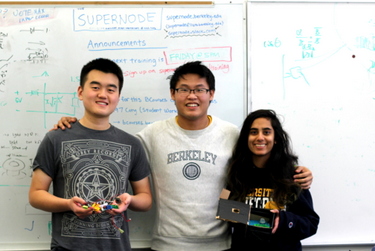 After voltage regulation, we essentially want to use microcontroller to control the stopping time of the car. Different from previous car that uses relay, we use analog controller which gives us advantage of using different stopping control clock as well as variety of the control on cars.

Lastly, we have LED project. Essentially, we build LED on to car to make it fancy. This project involves in some mechanical scale because you have to build a board that can glue the LEDs on as well as basic circuitry on lights. However, this is our last priority and will probably be doing this on second semester. 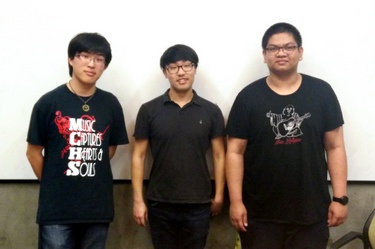 Our goal is construct an adaptable chassis that travels as straight as possible while remaining resilient to surface discontinuities like cracks, rocks, and inclines. The current projects involve a new drive train with suspension: traditional shocks or a Christie suspension.